Miracle, what does it mean? Something that happens unexpectedly. How does it happen? Well, it is unexpected and you cannot be much sure when, where, why, and how it happens, but somehow it just happens….. Yes, Miracle happens for a stray dog and can be rescue.

Those days my final examinations were going on for the 11th grade. Me and three of my friends spent a bit of time outside the school, chilling. Then we planned to go to a bakery to have some snacks. While going we noticed some of the puppies who were just a few weeks old. We went towards them just to pet them and suddenly a female stray came running towards us barking. Luckily, one of my friends raised her up by feeding her.

The puppies were looking pretty much healthy. We friends just forgot about our snacks and started naming the puppies. The puppies I named were Charlie (the black pup) and Angela (the gorgeous white and tan pup). Now as we named them we decided to take responsibility for them and as being just 16 years old we could not arrange proper dog food for them so we tried what we could have done and bought some packets of biscuits and milk for them. We took care of the ingredients in the biscuits. Every day, after school was over we used to come to the park and feed them and used to play with them.

Then arrived the summer vacations, all of us decided to not to go on a trip because we have to look after our growing puppies. During summer break me and my friends used to play cricket in the morning. After the match we used to play with the puppies which made our bond stronger. The female stray who was their mother was now comfortable with, us playing with the puppies. After playing we used to feed them.

As I researched a lot about dogs I taught Charlie and Angela some tricks like sit, stand, wave, etc. I and my so-called adopted puppies were on our way to learn some amazing tricks. They used to crave for treats and me being a 16 year old boy can just afford some bananas and on special days carrots also. I said to you I have done my research on dogs, banana and carrot are the favorite fruits of them. Although I could not buy those luxurious treats for my babies, I was giving them something which was healthy and also affordable for me. They too didn’t have any problem getting served this meal, I think because of our bond they knew I was doing my best.

As the summer break was over, we could not have those morning sessions. All I could do was to give them some biscuits over the wall of our school, which was just adjacent to the park. The puppies now were about four months old and they were growing really fast. Their requirement for food was increasing and we friends could clearly see the effect of the lack of food given to them. The four of us then started searching for a dog shelter near our homes because they were now part of our lives so we wanted them to be near and that someone could take proper care of them.

After searching for a few days we found a pretty good dog shelter so that stray dogs can be rescue. But the problem was that they hand over the puppies to the family who can raise them properly, actually, this was not a problem for them but we knew that it was going to be really hard living away from them.

Days passed and we were still discussing it. We came to the conclusion that the shelter can provide them the life which we couldn’t provide them. It was then decided that the puppies are going to go to the dog shelter. Yeah it was hard for every one of us to take this step, but it was necessary to do so. We went to the shelter and filled the necessary forms and all. We requested them to please take the puppies after some days and guess what, they agreed to it. I Did that because we all wanted to spend some extra time with the babies we brought up.

It was now two days left for the rescuers to come for stray dogs. We took a leave from the school for some days to spend some time with our puppies. Daily we go in the morning to the park just to surprise them. We started playing cricket and our match was over in about an hour. We were a bit tired so we sat on a bench to take some rest. About 15 minutes passed and there we saw our puppies coming to greet us. It was a bit hard to identify them but we could manage that.

There was something strange that I felt that day. It was about 5 minutes since the others were playing with their puppies my Charlie and Angela were not there. I asked my friends if they saw them the answer was “no”. Then we started searching for them. I felt like something was there in the bushes as I wanted to get close to it. A strange smell of a rotten fish started coming and began to get stronger and stronger. I pushed the bushes aside and there was Angela lying over there as if there is no life left in her. Suddenly her eyes opened a bit and she started to shake and then she started yearning and whining. There was some kind of white paste coming out of her mouth. We then found Charlie also lying on the ground.

A girl of about 9 years of age came to me and said that some boys came with playing bats and beat Charlie ruthlessly. We called the rescue office immediately and reported an emergency. As Charlie and Angela were taken to the hospital the other dogs were taken to the dog shelter and stray dog rescue. We reached the hospital and Angela was reported dead because of eating something contaminated on a regular basis. On the other hand, Charlie was reported with multiple fractures and a deficiency of blood. For what happened to Angela, I would always blame myself as I was not able to meet her necessary requirements.

After about 3 weeks I met Charlie as he was in the dog center. At first, he acted as if he didn’t know me but you know it is a dog and human relation of love, care, and affection, after 5 minutes he just came towards me running at his top speed and jumped onto me and at that point I thought ‘Yes miracle happens for stray dogs’.Stray dog can be rescue Me and my friends got to know that the other puppies were adopted by people but Charlie was left out because of health concerns. I decided to take him home. Charlie is now 1 year old. We love those morning walks and noon training sessions. Angela would always be near my heart and will always be remembered by me. We love you, Angela, forever. 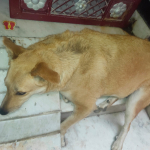 5 Grooming tips for a German Shepherd Next 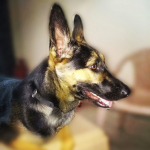 Such a nice initiative 👏👏

Thank you so much, Sanidhya Sharma, for liking this.
Please share this as much as you can so that people can also help stray dogs nearby them

Login with your Social ID